I left Amsterdam late yesterday morning and took a 2 hour train to Antwerp. I immediately didn't like the place, I don't know why. I checked into my hotel, Hotel Rubenshof, about 2.5 km away from the city centre. The hotel was great, very clean and had high speed Internet (very important to me hehe).

As soon as I put my stuff down, my brother called me to check my whereabouts. Turns out they decided to drive from their friend's house in Lommel to Antwerp, so yay! I met up with them, spent a few hours walking around until it was time for them to get back to Lommel. I went back to the hotel after that, but I couldn't still so I went back out. It was already night time, and there didn't seem to be anyone around in my part of the city, so I decided to take the tram to the station. There were people, but I didn't feel safe, so after wandering about for a half hour, I decided to head back to my hotel. 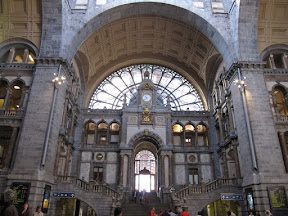 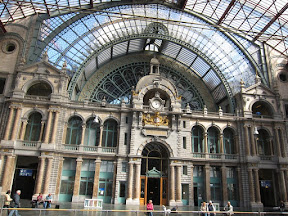 pics above are the interior of Antwerp Central Station. Grand, eh?

Since I didn't do much yesterday, I thought i'd wake up earlier today and take a couple of hours walking around the city. After 30 minutes of walking with my gps seeming to lie to me at every corner, I thought, screw it, I'm just going to go take the train to Bruges as soon as possible.

So that was my time in Antwerp. Maybe I ought to give it more time, but I am just too lazy today.

So I'm now in Bruges. Spent the day with my brother, took a horse carriage ride, climbed the 366 steps clock tower, ate some delicious waffles and ogled at the numerous chocolate shops. They went back to London around 4.30pm, I went back to the train station to get my luggage and checked into my hostel, the Lybeers Travellers Hostel. (I also managed to lose my locker ticket and had to pay a €12.50 penalty to have them open the locker hehe)

I went back out and wandered the streets until I got tired, had a whole pizza to myself and now i'm up in my room typing this out. Bruges is so darn pretty, I decided to skip the last night in Brussels and stay here instead.

Pictures below are taken in Bruges (first the view from the clock tower, second picture taken at one of the canals) 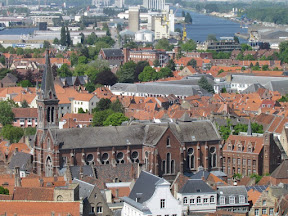 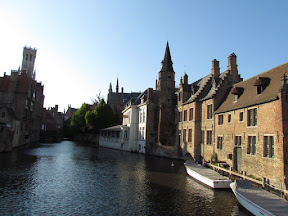 Day 1
My flight landed at Schiphol at around 5.30am, so i lingered around Schiphol Plaza for about half an hour before taking the train to Amsterdam Centraal Station (€4.20). The sun was already out, and I felt quite energized as I slept for a good 9 hours on the plane. It was a short ride into Amsterdam, about 20 minutes or so, the train was just as dingy as the one I took 5 years ago.

When i got to the central station, i scrambled around for a few minutes to look for a place where i could get the city transport tickets. I found the GVB office opposite the train station that sold day passes for €7. In hindsight, i didn't really need the pass, since in Amsterdam you could easily walk everywhere. Plus it was easier finding my way around by walking with the help of my trusty GPS than trying to figure out the tram routes.

Amsterdam is really nice in the morning when it's quiet and there's only a few joggers running around. I checked into my hotel, Hotel Prinsenhof on the eastern canal belt. The lady was very nice to let me put my things in the room despite the check-in time being 2pm (it was 8.30am when i arrived!) The room was really clean and nice, but with a shared bathroom on the lower floor. It cost me €45 a night, and it was a steal considering that it was a really busy weekend for Amsterdam. A point to note is, if you're in Amsterdam and not staying at a hotel with elevators, forget about bringing the large suitcase. The steep staircases are tortorous! Luckily i only had a cabin size suitcase with me, but even with only the 9kg i had, every step i took to get to my room i questioned the need for everything that was in the bag; like do i really need 4 t-shirts and 2 pairs of trousers in there? Do i really need shampoo, shower gel, etc etc?

Anyway, enough about my room and hotel, after i settled in my room i set out for the day. First things first, i went to find a place where i could take a canal cruise. I found one along one of the canals, and bought a combi-ticket for the Van Gogh museum. The canal cruise was great, except i chose to sit outside so i can take pictures, so i didn't hear a single thing that was said by the tour guide. I took a lot of pictures, but don't ask me what those places or things were! :-)

After the canal cruise, i went to look for the Van Gogh museum. Now, if you're in Amsterdam, be honest with yourself; are you into art? Do you spend your free time at home googling paintings? Do you like museums with huge crowds? If your answer is No to all three questions, then don't bother. I spent 30 minutes in there trying to see and appreciate the paintings before deciding that my time is better spent somewhere else. 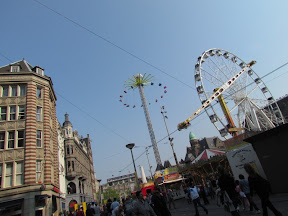 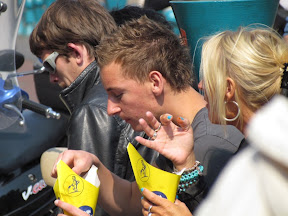 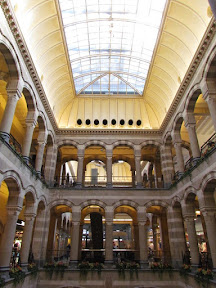 After the short stint at Van Gogh, i decided to go to Dam Square because i have some memory of it from 5 years ago. Dam square on that day has turned into a fun fair, complete with a ferris wheel and thrill rides. I stood around there for a few minutes, walked in and out of the shops in the back streets and decided to go look for the pancake shop i went to on my last visit. This city really gave me the munchies although i didn't smoke any pot or ingest any magic brownies! Mind you, before the pancake, i already had a brie and tomato sandwich and then some french fries. The pancake house is called Pannenkoekenhuis Upstairs, and yes, it's called that because of the crazy steep stairs you have to take to get some god awesome pancakes! Picture below is the lemon sugar pancake i ordered. 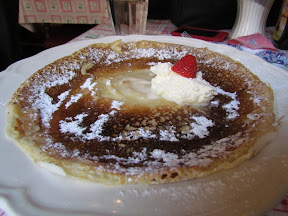 Next, i went to the foto museum, which was more within my area of interest, then i went to visit the Anne Frank House Museum which was interesting and sad at the same time. Must pick up her book when i get home from this trip.

By the time i got back to my hotel it was almost 9pm, and the bars outside my room were already partying like it's 2012. It all became background noise to me and i fell asleep as soon as the internet at the hotel suddenly stopped working.

All in all, i had a good first day in Amsterdam, and covered quite a lot of ground in 1 day thanks to my short attention span.

So begins another journey 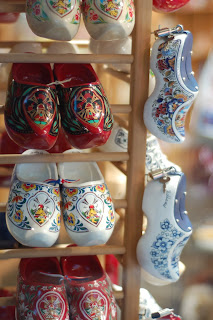 Ah, the day is finally here. yay! Picture above was taken on my one night trip to amsterdam with my friends Lan and Phil. All i remember from the trip was that we had loads of fun roaming the streets of amsterdam and that we had some awesome pancake at some pancake place. The rest of the trip was a blur to me, not that i was too high on anything!

Email ThisBlogThis!Share to TwitterShare to FacebookShare to Pinterest
Labels: travel

ya ya, so much for doing a run journal and what not.

on 29th January I did a 11k loop around Putrajaya, took me two hours, and took about 2 months to recover. every thing became an excuse, too much work, too hot, too wet etc etc. Bottom line is, i got lazy.

Next week is the Energizer Night Marathon, i'm going for 11k, and all i've got to show for it is an 8k practice yesterday and about a 6k tryout last weekend. Whatever lah

So anyway, based on my sucky performance, i target to finish this Energizer 11K below 110 minutes. This goal will require me to run 25% of the time and walk the rest.

i want to get this thing over with, and take my vacation. This time i'm off to Amsterdam, then off to do some city-hopping in Belgium before taking the train from Brussels to London. I've already sent a big empty bag to my brother in London. That way, at the end of my break, i will still have space to bring home goodies, and not have to drag it around Amsterdam and Belgium.

I can't wait for the my week-long break next week. Monday checkup, Tues and Wed cuti, then Thurs and Fri CNY. awesome.

I'm supposed to do a 5K test run last Sunday, but I ended up walking all the way. My whole body was aching (still is) from the session with my aunts on Saturday morning.  For a total of 3 hours, we did a variation of crunches, squats, weights and finally some HIITs (High Intensity Interval Training).  Felt OK the whole day after, but woke up on Sunday morning feeling stiff all over especially on the shoulders and upper leg area.  So on Sunday I decided to take it easy and just walk to get the blood flowing.

The plan for this week:

So, last Sunday's 10km didn't happen. I didn't wake up in the morning, and the whole afternoon was filled with family related activity. Ah well, c'est la vie.

Tues : 5km + 30 push ups, 30 sit ups, 30 squats - Done. In fact, i ran the 5k in 45 minutes, thanks to an awesome podcast i was listening to during the run which powered me through. Can't remember what it's called now..will get the name later.

Supposed to do another 5k today. But it's too hot outside...!

Then Junior Masterchef came on TV. dangit. anyway, after the first episode i just put on my gear, got out before the next one started.

Took me an hour, but i made it.

Need to do something about the mozzie bites though. Itching all over now. urgh.